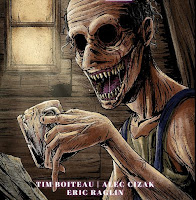 In addition to finally choosing three correct point-spreads last week and winning back all the money I'd lost so far this football season, this last week has brought several new appearances by Mr. Cizak and/or his fiction.

A story of mine originally titled "Old 55" appears at a relatively new publication, NOVEL NOCTULE. The editors went to town on the story, making my clipped, obscure prose more articulate. They also changed the title of the story to "Civilized Folk." I appreciate the work they put into preparing the story for their publication, so I'm not going to argue with their decisions. They have a vision, they made the story coincide with that vision. The reader will be better off for it. I'm very impressed with this publication and I encourage readers to support it and writers to submit stories that are genre appropriate. 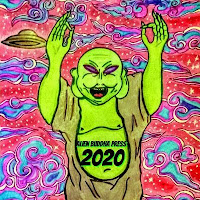 Speaking of editors, as editor of PULP MODERN, I was interviewed by the folks who put together the ALIEN BUDDHA ZINE. I discuss a lot of things. One thing I say in the interview might cause some controversy. I'm not going to go into it unless someone brings it up. Long story short, I should have articulated myself better. We'll see how it goes.

On the horizon is the next issue of Pulp Modern (look for it in early 2021) and my novel Cool It Down, which completes the unofficial trilogy started with Down on the Street and Breaking Glass.