The holidays are here. Time to buy presents for your friends who read books. I got all your needs met. Let's start with a double-shot of Tech Noir. Switchblade Magazine came up with this project and ended up with an overflow of great stories. Editor Scotch Rutherford split the stories into two camps and sent one over to Pulp Modern. The result is the best thing since Marvel Team Up. You need both issues. If you're an Alec Cizak fan (and, by the way, thanks if you are!), you need both issues. I put together the editorial talent responsible for the PM issue and I have a story called "Post-Biological Stress Disorder" in the Switchblade edition. Get them both. Read them. And review them.

If you didn't get the memo, ABC Group Documentation published a collection of my horror stories (weird fiction is the more appropriate term, but outside of the pulp fiction community, few people know that term) called Lake Count Incidents. It's gotten great reviews so far. It's worth reading, trust me. It has some adult material, but nothing gratuitous.

If you missed Pulp Modern, Volume Two, Issue Four, shame on you. Both PM issues released this year were fully illustrated. Folks are picking up on the fact that this is a stellar issue. Buy it. Read it. Review it.

I also had short stories in Tough 2 and Switchblade #11. These two journals
have taken over as the premiere crime fiction journals of the contemporary age. As a side note, the original All Due Respect blog is making a comeback thanks to Chris Rhatigan and David Nemeth. That means there will be three solid markets for crime fiction writers (and they all pay).

Remember: You could spend your hard-earned Christmas money on corporate-approved fiction that takes NO chances. You could read the same thing, manufactured over and over again, just given a slightly different title and a slightly different cover, and feel safe and comfortable because you know there won't be any surprises, won't be anything that challenges the worldview the corporate media has pounded into your head and convinced you reflects your actual opinions and experiences...OR, you can read something that will remind you you're alive because it will shock you, offend you, rock you right out of your safe space and send your pulse into hyper-drive. Independent fiction like the journals mentioned here are the last gasp of free expression. No other medium is working as hard to challenge the status quo. And if art doesn't challenge the status quo, what the fuck is the point?
Posted by AC at 5:04 PM No comments:

Some notes on NAPTOWN NOIR 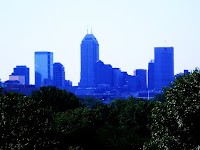 If you haven't checked out the submission guidelines at the Uncle B. Publications website, you may not be aware I am editing a charity anthology titled NAPTOWN NOIR. The proceeds will go to the Indiana Literacy Association. It is my belief that nothing liberates like literacy. With few exceptions, I can't think of a more important social cause.

For those who don't know, Naptown is the nickname jazz artists gave to Indianapolis in the 1930s and 40s, when America's music still ruled the world. Indianapolis was a major stopover between the South and Chicago. Near what is now MLK and Indiana Avenue, a thriving jazz scene existed during this period. All the greats stopped in Indy and played there. As the country turned its back on jazz in favor of the more simplistic rock and roll sounds hustled to the youth, the jazz scene in Indy, and the rest of the country, for that matter, died down. By the way, Indy does have a wonderful jazz club today near Broad Ripple. It's called the Jazz Kitchen and I suggest a visit should you spend any time in Indianapolis.

So, what am I looking for? I am not interested in stories filled with gratuitous violence, sex, or foul language. It's not that there isn't a place for such things in crime fiction, this just happens to not be such a place. Remember the old James Cain novellas, how he flew very adult topics in just under the radar? That's what I'd like to see. I am not interested in mysteries, whodunnits, or police procedurals. I am looking for CRIME FICTION. Think Jim Thompson or Elmore Leonard. I am also not looking for stories beating readers over the head with some sort of message (even if I myself am often guilty of doing so!).

Finally, there must be an Indianapolis element of the story that demonstrates the writers knows Indy well. You don't have to be from Indianapolis, but you certainly need to study the town and its history. I will spot a Chicago or L.A. story 'fixed' to sound like a Naptown story from a mile away. Do your homework.

I look forward to reading submissions as they arrive.
Posted by AC at 1:27 PM No comments: