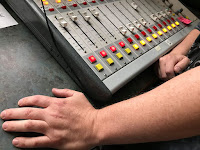 Been a long time. Here's some shit you may need to know to keep up with your Alec Cizak fandom:

Sad news from the Freedom of Speech front -- Some of you may know I host a radio show called Drive-in Radio on Tuesday nights on a college station in Missoula. Well, I started a talk show for Friday mornings in the beginning of this year. I co-hosted the show with my girlfriend and another DJ who hosts a punk rock show on Friday nights. We talked about politics and popular culture and learned very quickly that for every possible thing you can say on the radio, there's at least one moron out there who will get offended by it. The show was stalked by self-righteous indignation junkies from the beginning and finally, a few weeks ago, the outrage addicts won the battle and the students in charge of the radio station banned the morning show. Ironically, the show that compelled them to go ahead and trample our First Amendment rights was a show about...wait for it...wait for it... Freedom of Speech! You can't make this stuff up, folks!

In better news, Breaking Glass, my first full-fledged novel to be actually published is coming very soon (probably late July / early August). Breaking Glass tells the story of what happened to Chelsea Farmer after her ordeal in Down on the Street. Please spread the word, read the book, and leave a review at Amazon.

Pulp Modern, volume two, issue three, should be available by the beginning of July.

If you can't wait to get your Alec Cizak fix, you may check out the following journals, which recently published short stories of mine:

Switchblade Magazine, which is quickly filling the void left by the absent Thuglit, published a very nasty story of mine called "Nasty Habits." This story deals with a subject most journals won't go near. That's, of course, what makes the underground scene so vital. Buy the journal. Read it. Review it.

Just this week, Horror Bites, a journal available on kindle only, published a weird fiction story of mine called "Broke." Buy it. Read it. Review it.

In the coming months I'll have a story at EconoClash Review and a few other places.

ALSO: ABC Group Documentation will publish a collection of my weird fiction later this year called Lake County Incidents. If you like your horror refined and thought-provoking, this one'll be your huckleberry!
Posted by AC at 7:43 AM 1 comment: