Well, if I haven't pissed off the entire world yet, my next novella just may do the trick.

Labels: Down on the Street, Iggy Pop, The Stooges

Abnormal Man is one of those books—it’s going to take you places you would never voluntarily go. But you’ll go along for the ride, because Grant Jerkins gives you little choice. Written in the second-person present tense, Grant implicates the reader in the thoughts and actions of his three main characters, forces empathy with people you normally hope the law will catch up with and either lock them away for good.

The book is about Billy, a teenager who gets a sexual thrill from fire. Circumstances put him on the road with Frank, an older, violent, even more troubled character. They end up at a trailer with Chandler, a much older, much more twisted individual who deals in dope and mild child pornography (if there is such a thing). From that description, the average person no doubt feels compelled to turn away. But Jerkins’ writing chops are on-point—just enough description to put you in the time and place of the action. Observations are made that all people, whether they’re suffering similar psychosis to the characters or consider themselves “normal,” have made (the most obvious being the impression young Billy has of the moon, and how he carries that impression with him throughout the book).

This is not always an easy book to read. Squeamish, unimaginative (and I would argue, people devoid of genuine empathy) readers might toss it out early on, excusing their lack of empathy by saying, “I don’t like these characters.” But for the reader interested in understanding minds unlike their own, it does what great books are supposed to do—it drops you right in the shoes of strangers and allows you to think about society’s “undesirables” in ways more complex than simple black and white generalizations. I couldn’t help but think of Lolita as I read it, and how that book no doubt shocked readers when it was first published. Abnormal Man should shock the status quo, but it should also be elevated to the same critical status as Nabokov’s book.

(Abnormal Man was the first publication from ABC Group Documentation, who will be publishing my novella Down on the Street in a few months)
Posted by AC at 5:41 PM 6 comments:

Mr. Cizak Returns to Beat to a Pulp! 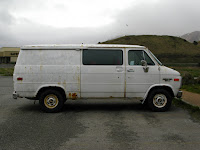 So the first story in the Lake County mythology I'm putting together has been published at Beat to a Pulp. It's called "Creepy" and takes on what I think of the over-use of that particular word. Enjoy!
Posted by AC at 2:02 PM No comments: