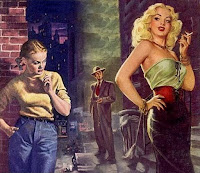 Well, it's been a rough spring and a cruel summer so far, but after going through the greatest batch of stories I've ever received for PULP MODERN, I've selected work by the following fifteen writers (and anybody who had a story rejected, take heart, I had to pass on A LOT of great, great stories)--

Look for issue nine in paperback and kindle in July!
Posted by AC at 6:20 PM No comments:

All Kinds of Stuff! 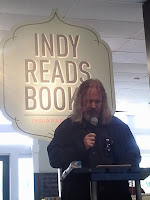 Some updates, links, and shit you need to know if you're an avid follower of Mr. Cizak (or just a casual, weekend fan) --

I am in the process of finishing a Drifter Detective novella for Beat to a Pulp. It's set in 1956, on the border between El Paso and Juarez, and has a cameo by someone I dearly hate. Look for it later this year.

I have been invited to read at the Kellog Writers Series at the University of Indianapolis in 2016. I earned my MA from UIndy and had an excellent time doing it (as opposed to the horrific time I spent getting my MFA at Minnesota State in Mankato). It is a tremendous honor to return to the university and read for the students and anyone else who shows up. That will be on March 7, 2016. A Monday. If you're in the area, be there, or be publicly humiliated by me on social media!

I got sick just before my 25th high school reunion. Thus, I have yet to attend a reunion. My former classmates should not take it personally.

In case you missed some of the reviews on the web of CROOKED ROADS, here are some links:

The razor-sharp noir writer William Wallace explores the disparity in the book with regard to subtle violence and all-out gore (something I struggled with as I decided on which stories to include):

And Regular Guy provides the most enthusiastic review here:

If you haven't bought and read the book yet, you're missing out. According to Amazon reviewer Mary Effertz, "someone should give" me "a Pulitzer." I've been saying it for years, and finally, the public agrees!

(For the record, Mary is the biological mother of my old friend Chuck Yates, so there is slight bias).
Posted by AC at 6:46 AM No comments: