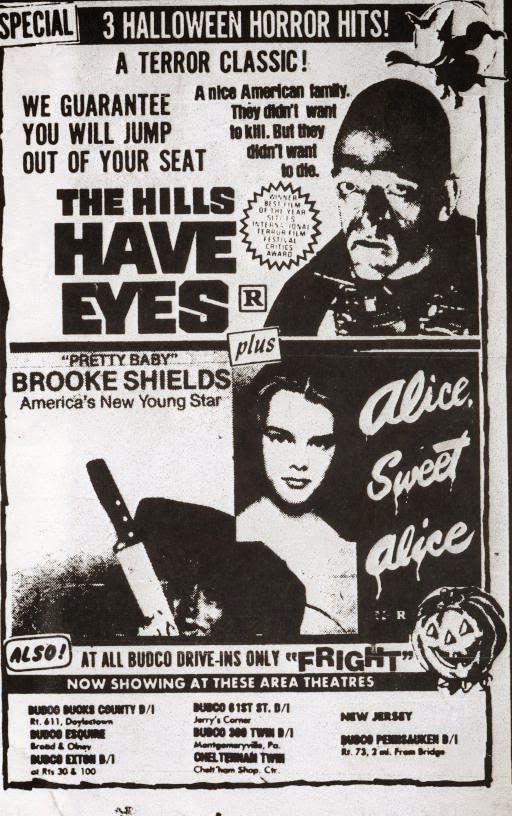 So Craig T. McNeeley, co-editor of the new GRINDHOUSE FICTION series, has all the details you need:

Remember back when this country was free and you could go and see a triple feature of Charles Bronson delivering justice on the big screen like God intended?We do too.We are seeking a few good men and women for new anthologies of Grindhouse Fiction. Novellas inspired by films such as Escape From New York, The Exterminator, Don't Answer The Phone, I Eat Your Flesh, I Drink Your Blood, I Spit On Your Grave, and many more. We want you Dirty Marys and you Crazy Larrys. Let freedom ring.

Here's what you've gotta do: send a query letter to doublelifepress (at) gmail (dot) com by April Fool's Day with a synopsis of your novella. If we like what you've got, we'll ask for the rest. Make sure your submissions are 15-20,000 words in length and don't forget the popcorn.
Posted by AC at 11:00 AM 1 comment:

So Uncle B's Drive-in didn't quite make it. That doesn't mean there isn't a home for low-budget fiction. Craig T. McNeeley and I are putting together a new project called GRINDHOUSE FICTION. Each issue will contain three novellas, roughly 15 to 20 thousand words. We will have a call shortly for queries, so start thinking up some grimy, sleazy fiction that cuts through the veneer of all that fancy shit the tea and biscuit crowd consumes in effort to avoid facing the real world, and get that shit written! First issue is scheduled to be released on July 4, 2015, and the deadline for queries will be April 1, 2015. More information on the way...
Posted by AC at 8:30 AM No comments:

Uncle B’s Drive-in Fiction is, like so many drive-in venues, closed for good. No longer in print. I’ve done what I can to keep this problem child alive and nothing seems to help. I believe it suffered the same fate as the Grindhouse movie from a few years back. Too much for one volume. I sent copies to reviewers who thanked me kindly and then never reviewed the book. Even if they hated it, they could have said so. I suspect that reading the entire thing was a daunting task and most of them said ‘fuck it,’ threw it in the garbage, and moved on.

And what a shame that nobody gave this book a chance. Matt Funk’s contribution won an award. David James Keaton’s contribution eventually morphed into The Last Projector. It also had ace stories from Garnett Elliott and Jimmy Callaway.

I supposed the lesson learned is, don’t weigh down a reader with too much at once. If I had to do it all over again, I’d easily limit the stories to between 5000 and 10,000 words and maybe cut the number of writers down to three. Oh well. You can get copies of the book for dirt cheap at Amazon.
Posted by AC at 2:07 PM No comments: