This week at BTAP

Paul Brazill and David Cranmer provide some fast-paced, science fiction adventure in the first of a serial, LoVINg the Alien.  So far the story makes more sense than the David Bowie song of the same name.  Paul's writing style is crisp and economic.  No space is wasted on anything extraneous.  Pure story.  Go read it.
Posted by AC at 10:35 PM 2 comments: 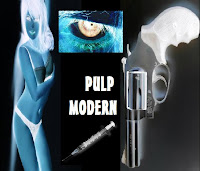 I am starting a print journal devoted to pulp fiction.  The guidelines are here:

Any suggestions on how to improve the guidelines would be appreciated (as long as they don't come from some angry guy living in his mother's basement who thinks his story that was published in his third-grade school newspaper qualifies him as a 'professional writer'...Believe me, I've gotten all kinds of legal advice from that particular breed!)
Posted by AC at 6:21 AM 6 comments: 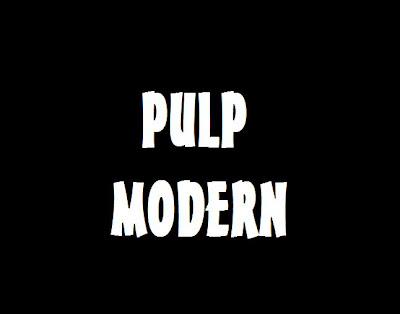 Chris Rhatigan has some kind words for Katy Too at his blog Death by Killing.  He also mentions some ace stories by Copper Smith and Matthew Funk.
Posted by AC at 5:27 PM

Labels: Death by Killing, Katy Too 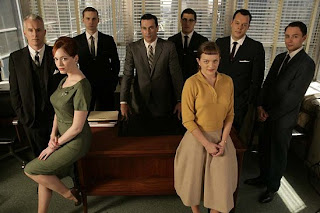 So I'm always getting tv shows from the library on dvd and watching them to put me to sleep at night.  I made the msitake of getting the first season of Mad Men a couple of weeks ago.  I say 'mistake' because I can't sleep while this show is on.  I wasn't too sure at first, but by the season finale ("The Wheel"), I was hooked.  I think some of the show's (very few) critics are correct in pointing out that this is a series that wants to have and eat it's cake.  While it tends to go overboard on depicting old-school sexism, the show can be seen to be contributing to sexism the way it clearly "objectifies" its women.  Frankly, I don't care.  I can't figure out why, but this is a show that makes you think.  Quite rare these days.  While it doesn't appeal to the drive-in junky in me the way Breaking Bad does, I think this may actually be the better of AMC's original two series (I haven't watched The Killing yet.  It'll be another one I get on board late, mostly because I'm rewatching the entire Twin Peaks series at my brother's house on movie night so I don't need two running stories about a dead girl...)

Just a side note, in 2002 I was without regular work in L.A.  I had to take jobs as an "extra" on tv shows.  I was always cast as either a lawyer, politician, or cop or security guard.  One of my first gigs was on a show with Sally Field called The Court.  Don't feel bad if you missed it, it was on for about six episodes.  Anyway, the director singled me out to do a little bit with a young blonde actress where she walks into the courtroom and heads in the wrong direction, so I grab her and redirect her to where she's supposed to be.  I remember that young lady quite well because she had big, round, gorgreous eyes and a hell of a body.  I just learned, by watching Mad Men (I'm on season two now) that the name of that young actress was/is Christina Hendricks.  Oh well.  Even back then she was way, way out of my league... (And I don't even believe in "leagues")


Photo courtesy of screenrant.com
Posted by AC at 11:49 AM 5 comments:

Mr. Cizak at Beat to a Pulp

I consider Beat to a Pulp the gold standard for pulp fiction sites on the Internet.  It's the only site that ever had an editor call me and tell me how to improve my writing.  David Cranmer and Elaine Ash are responsible for the hands-down coolest goddamn anthology of the last few years.  Being published at BTAP is an honor.  This week, my story Katy Too appears at BTAP.  It's pure pulp fiction.  Based on a story an old (and now, unfortunately, dead) Irish-American gangster told me (among many others I believe he expected me to put on paper).  In addition, David Cranmer wrote a hell of an intro for me at his blog The Education of a Pulp Writer.  Thanks to Mr. Cranmer and thanks to anyone who takes the time to read the story.
Posted by AC at 7:17 AM 5 comments:

You'd think this was the Matthew Funk fan club.  Mr. Funk's flash fiction is on display at Shotgun Honey in a number titled Nothing to Say.  You'll see from comments I left there that I found it very instructive with regards to how the protagonist makes use of pliers and duct tape.

If that's not enough to add to your early weekend anxiety, Jodi MacArthur has a nice piece at Flashes in the Dark called Spin Top-Swan on the Rocks.  This story is hallucinatory and rich in beautiful, nightmarish-images.


Photos courtesy of charlesandhudson.com
and soulseasons-yiota143.blogspot.com
Posted by AC at 3:08 PM 4 comments:

...how the All Due Respect email address got out to scam artists who pretend to have access to millions of dollars, who will share their wealth with me if I only give them my bank account number so that they may transfer the money over to me.  I'd love to meet these people in person and demonstrate my feelings about their emails with an interpretive beat down...
Posted by AC at 11:17 AM 3 comments:

Labels: All Due Respect, spam 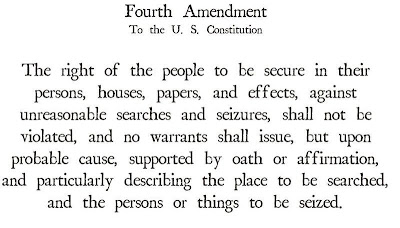 The Indiana State Supreme Court has taken a giant shit on the Constitution of the United States.  They have passed a horrific law that states you may no longer defend yourself if a police officer enters your home without a warrant (an illegal act, according to the Fourth Amendment).  Folks, this is it.  Kiss freedom goodbye.  Once the rest of the country sees that my goofy hillbilly neighbors don't have the sense to resist this crap, it will spread across the country.  Imagine, cops just walking right into your home without a goddamn warrant.  Our Founding Fathers fought and died so that we wouldn't have to endure the nightmare of a police state.  Looks like the Indiana State Supreme Court doesn't know too much about the law.  Funny, isn't it?  I hope the three unAmerican justices who voted for this Nazi-esque legislation has his or her home invaded by a cop.  See how they like it.
Posted by AC at 8:06 PM 3 comments:

Nasty Stuff this week at BTAP

Linda Schenck, supposedly a sensitive, romantic-type, offers up Nobody's Listening at Beat to a Pulp this week.  Mrs. Schenck delivers a short story that will make your mind gasp when it's over.  It's a wonderful example of fiction being more honest than non-fiction.  It's also a well-layered tale that compels the reader to think about several issues at once.  Very nice work, Mrs. Schenck.

PS-- Next week, I believe, a writer I am too familiar with will be featured at BTAP.
Posted by AC at 9:12 AM 6 comments:

Copper Smith sent me this message:


I'd like to invite you to partake of my flash fiction challenge: Going out like Elvis – dead rock star noir!
Here's a sample to get you going: Nothing to kill or die for.


You get the idea: spin a suspenseful tale in which you save your favorite dead rock/rap/reggae/country/jazz star from certain death…

Or you avenge their murder…

Lots of possibilities: a zombified Elvis, an avenged Marvin Gaye – or just craft a nifty noir-ish tale out of a song by your favorite dead rock star.

It's up to you. Just make it pulp-y and noir-y and make it revolve around a dead rock star. Also make it under 2000 words. Just don't make it about a hit man targeting Mark David Chapman before he can get to John Lennon because I've already gone there.

I'll have my readers vote and the winning story gets immortalized in mp3 format by the Uppercut Avenue players, kind of like this or this.

The deadline is June 1st – so get to work!

Let me know if you're on board and feel free to share the news!

I'm still working on mine.  Looking forward to seeing what other folks come up with.

Photo courtesy of theelvisisalivemuseumonline
Posted by AC at 4:31 PM 2 comments:

All Due Respect's Summer Schedule 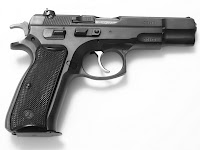 Here's a look at who will be getting their all due respect this summer:

June -- Jim Wilsky reminds us that white collar folks are getting screwed in this economy as well.

July -- Copper Smith takes us on sea cruise not sanctioned by Disney.

August -- Patricia Abbott introduces us to a thoughtful, caring father.

September -- C.J. Edwards introduces us to the girl next door and her friendly neighbor.

There's some shootin', some schemin', some robbin', some creepin' around, and some good old fashioned stalkin'.  Looks like a fun-filled summer for the whole family!
Posted by AC at 11:08 PM 3 comments:

I torch The Burning at Let's Kill Everybody! 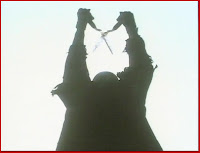 This is the first review I wrote for Jimmy Callaway's series of blogs dealing with exploitation movies.  I think it's a little choppy and there's at least one place where I wrote a sentence that flat out doesn't make sense.  I wrote the review over winter break when the OCD got me hooked on watching early 80s slashers.  People love The Burning and I'm sure will hate me for pointing out what I think is obvious-- It's a terrible movie and a terrible attempt by the Weinstein Bros. to deconstruct a genre right at the height of its popularity.  With the benefit of time, I have decided I do not like The Prowler nearly as much as I did back in December.  I rewatched it and realized it gets repetitive.  The only impressive thing about it are the first three kills, which display some of Tom Savini's finest work.  Upon seeing the footage that was cut from the original My Bloody Valentine (nine friggin' minutes!), I've decided the only slasher to come close to Friday the 13th or the godfather of slashers, Halloween, was, in fact, My Bloody Valentine.  It wasn't quite as scary, but the atmosphere was great, the gore was fantastic and the blue-collar setting separated it from all the other Halloween imitations.  The painful truth is, the slasher genre was nothing more than people trying to cash in on the success of Halloween.  What none of the producers of the subsequent films understood was that Halloween worked due to suspense.  The Prowler has moments that are suspenseful, but the sloppy plot construction takes away any power that suspense might have had.  I think it's time to applaud John Carpenter for being the only member of the New Hollywood generation who could ever have replaced Alfred Hitchcock.  Anyway, read the review if you like and leave a comment, even if you think I'm full of shit.
Photo courtesy of buckthereom.blogspot.com
Posted by AC at 10:17 AM 6 comments:

Mr. Funk's "Times Past" received the 2011 Spinetingler Award for Best Short Story on the Web.  It is a great honor to have published the story at All Due Respect.  Appropriately enough, Matthew Funk will be the first writer to appear twice at All Due Respect.  His story "Broken Play" will be featured in the December edition.  Congratulations once more, Mr. Funk.
Posted by AC at 11:10 AM 3 comments:

All Due Respect #11: Barrie Darke

For the second month in a row, All Due Respect belongs to a writer from across that big lake called the Atlantic.  Barrie Darke proves himself the United Kingdom's answer to Mark Twain in his unique story, The Cacker.
Posted by AC at 7:57 AM 3 comments: