All Due Respect #10: Nigel Bird

Last month we spent time in a classy trailer park.  This month's All Due Respect spends some time in the sleaziest possible environment-- a Hollywood movie shoot!  International super-star Nigel Bird breaks one of the most sacred taboos in Hoodwinked.
Posted by AC at 10:01 PM No comments:

Labels: All Due Respect, Nigel Bird

"A Moral Majority" now up at Paraphernalia Quarterly

These folks said they'd let me know before the story went up.  I stumbled across another site called "The Literary Underground" that alerted me my story A Moral Majority was included in the latest issue of Paraphernalia Quarterly.  Anyway, take a look at the story.  It's the last story I sent out where I still 'wrote' the exact pronounciation in dialogue.  I've since had a change of heart on that whole matter.  Whenever I put together my Haggard, Indiana anthology I'll fix that.
Now, I have a lot of friends who are Christians.  I'm not bashing Christianity here, just hypocrisy.  Please keep that in mind.  This could be a story about anybody.  It just happens to be about a preacher from my made-up small town, Haggard, Indiana (and anybody looking at a map can clearly see I'm talking about good old Hobart!)


Photo courtesy of seminaryblog.com
Posted by AC at 2:13 PM 4 comments:

My review of BAD LT. at Let's Drink Everybody

To read about a movie I actually did like, head on over to Jimmy Callaway's blog, Let's Drink Everybody! and take a look at my review of Bad Lt.
Posted by AC at 6:47 PM No comments:

Way back in the dark ages, also known as the late 1980s, I used to accompany a friend of mine, Kali J., to Star Trek conventions. Kali was rarely hounded by men in the normal world. At Star Trek conventions, however, the boys tripped over themselves trying to talk to her. Kali was and is, for the most part, a man-hater, and never responded well to boys hitting on her. She would pay for my admission and I would tell the Trekkies I was her brother and that allowed Kali to do whatever it is she needed to do at these conventions in peace. In those days, conventions were operated by locals and had a very grass-roots feel to them. The last time Kali used my services at a Star Trek convention was 1990. Some corporation had taken over and the difference was obvious. The greed-factor was multiplied by a thousand and the guests, while “bigger,” were snobbier and less than cordial with their fans. 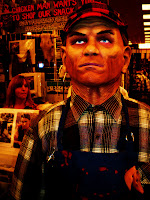 Flash forward to today. I decided to head on over to the Marriott East and check out the HorrorHound Weekend. The theme was ‘80s Slasher Movies.’ My half-dozen readers are well-aware that I love early 80s slasher movies, so I figured it might be interesting. My overall opinion is this: Horror movie conventions are like screenings of Rocky Horror Picture Show with slightly fewer transvestites. The hardcore fans do a great job of dressing up like their favorite, beloved serial killers and ghouls and what-nots. There were a few zombies and a whole lot of zombie-killers. I find that interesting. If you think about it, the original Night of the Living Dead was about the new order (i.e., youth and “minorities”) taking over the old order and how the reactionaries respond to that movement. That means the zombie-killer phenomena is, essentially, a reactionary expression. The zombie-killers were dressed like soldiers and carried fake pump-shotguns. Yup. That about sums up the political landscape of America today.

I met the guy who actually did all the killing in The Prowler. Real asshole. Turns out he was the First Assistant Director on the picture. That makes sense. 1st ADs, traditionally, were assholes because they had to keep the set running. Most of the “guests,” I discovered, were bitter old men who were pissed that their brief turn as a serial killer thirty years ago didn’t flower into the same career Wes Craven or Jamie Lee Curtis had. Even Sid Haig looked sort of sad and bored with the whole thing. 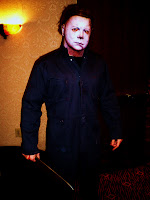 I sat in on two panels. The first had members of the cast and crew of Halloween III. As most people know, that is one of the most interesting failures in the history of b-movies. People hated it initially because Michael Myers wasn’t the villain. Recently, it has gotten a critical re-examination. The truth is, it’s not a very good movie. But, it has that early 80s feel to it that allows me to forgive it out of nostalgia. The first time I saw Halloween III was at my friend John Baker’s house. He was having a birthday slumber party. We were all in the fifth grade. Halloween III was playing late on HBO, following another classic of that era, H.O.T.S. By two in the morning, having had my hormones sent into a frenzy by all the boobs in H.O.T.S., Halloween III seemed like a mystical film. Anyway, the panel included the director, Tommy Lee Wallace, and the two main stars. Wallace got pretty political. All in all, I enjoyed that panel more than I thought I would. 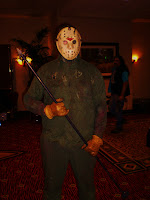 Then came the bitter old farts. The 80s Slasher panel was beyond disappointing. Ted White, who played Jason in Friday the 13th part 4, slammed the director, Joe Zito. Even worse, Derek Mackinnon, the effeminate killer in Terror Train, slammed his director and Jamie Lee Curtis. All of these guys make their living off of obscure parts played in movies very few people actually care about and all they can do is bitch and moan. They don’t understand how lucky they are.

Everything is about money now. All these old farts charge people to pose for pictures with them. The old farts in the slasher panel are people whose faces never even appeared in the movies they were in. Their contributions are paper-thin. Shouldn’t they be grateful for the plane ticket, hotel room, meals and adoration they don’t deserve? Maybe I just don’t get this whole convention thing…
Posted by AC at 3:00 PM 6 comments:

Matthew C. Funk's story Times Past has been nominated for a Spinetingler Award for Best Short Story on the Web.  Thanks to those who nominated the story and thanks to Mr. Funk for contributing to All Due Respect.  If you haven't read his story, or his work elsewhere on the web, do yourself a favor and take care of that right now.
Congratulations also to Jodi MacArthur for her romantic little yarn, Pillow Talk, at Beat to a Pulp.  Again, if you haven't read it, do so.  Right now!
Posted by AC at 6:51 AM 5 comments:

Last year I attended the Summer Institute for the Hoosier Writing Project.  It is part of the National Writing Project and if you are not familiar with their purpose, please stop by their website and take a look.  If you know of a Writing Project in your state and you are a writer, I would recommend you get involved.  This is an effort to improve the way writing is taught in schools.  As writers, we are aware of all the things writing can do for an individual.  It is a tool for learning, for getting a job, it is even medicine.  President Obama is taking funding from this program.  Please visit this site and see what you can do to prevent this from happening.  Obviously, the most important thing writing does is teach critical thinking.  It is obvious why this corrupt government would want to steal funding from an effort to improve the critical thinking skills of our young people.
Posted by AC at 9:22 AM No comments:

Do something better than just drinking green beer!

This time the questions were asked by someone else and my answers weren't so pretentious, I promise!  Six questions about editing All Due Respect can be found at Jim Harrington's blog.
Posted by AC at 6:23 PM 6 comments:

Mr. Bedwell was my 9th grade Humanities teacher.  He team-taught a class called "Man and Society."  I was forced to read Animal Farm and 1984.  My life has not been the same since.  Mr. Bedwell was an outstanding teacher who managed to make 15-year-olds think.  These days, teachers are lucky if they can get their freshmen and sophomores to sit down and shut up for more than thirty-seconds.  I am saddened by the news of Mr. Bedwell's passing.  I trust his family is aware that his life could not possibly have been more productive and meaningful to every snot-nosed kid who sat down and shut up in his classes long enough to learn how to think critically about anything read in a book, seen on television or a movie, etc.

This is a particularly significant time for me to think about teachers and the role they play in this society as Greedheads around the country attempt to take away the pittance teachers earn.  Just for the record, when I taught high school in Los Angeles, my starting salary was $38,500 a year.  Sounds great, doesn't it?  Well, rent for a tiny, TINY studio apartment in L.A. (at that time-- I hate to think what it is now) was about 1200 a month.  So, chop off 14,000 right away.  Take another 33% for taxes and you're left with 11,000 for an entire year of gas, food, utilities and that all important car insurance for that all important car (it's L.A., remember?)  What are you left with?  Usually, debt.  For those of you who may think teachers are overpaid fatcats living off of your precious dimes, take heart.  They don't make enough to save anything at all and, as stated, are usually left in debt by the end of the year paying for basic needs.

No, you filthy Greedheads, teachers are in no way overpaid.  They are, in fact, radically underpaid.  If you have never attempted to corral a classroom of hormonal teenagers long enough to lay some knowledge on them, you have no idea what this job entails.  Additionally, the teacher's job does not end when the sixth period bell rings.  Teachers work more extra hours than anyone else and they don't get paid for it.  So, let me assure you, starting salary for a public school teacher should be no less than six figures.  I think 150,000 is fair and the ceiling should be 500,000.  That's fair, folks.

Unless, of course, the Greedheads want a stupid population.  Hmm...
Posted by AC at 6:29 AM 3 comments:

All Due Respect #9: Scotch Rutherford

This month's All Due Respect exhibits a level of degenerate behavior that almost makes me sick!  Scotch Rutherford's Let's Make a Deal goes beyond the call of duty as far as ADR's writer's guidelines are concerned.  It is an unflinching look at some trailer park criminals who don't have nearly as much control over their situation as they would probably prefer.  Enjoy at your own risk!
Posted by AC at 8:02 AM No comments: