A Few Words on Political Violence 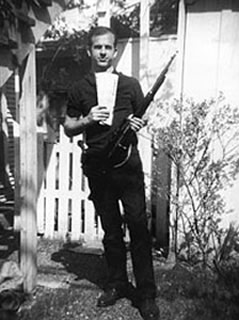 So the pundits on Fox News and MSNBC are pointing fingers at each other over what caused the shooting in Arizona this weekend.  The suspect is, as always seems to be the case, a "loner," a "lone nut," a guy with mental problems and not much desire to be a member of his high school glee club.  And so the commentaries come out about these "dangerous" people who don't want to be part of the crowd.  Who don't know how to think like sheep.  And from the left, the calls for gun control and from all corners, efforts to "prevent" this sort of tragedy from happening again.

Bad news, folks.  It can't be prevented.  John Carpenter talks about the "lizard brain" that lurks in all of us.  Writers of horror and crime fiction don't have any problem calling upon this part of the brain to conjure up stories about brutality and violence among humans that occurs in nature, among other animals, every single day.  We are, in the end, animals.  No different.  Our blood-thirsty drive for preservation is expressed in many creative ways (art, corporate greed, procreation, etc.), but that drive exists and will always exist.  No amount of Prozac or shock therapy or profiling of teenagers who don't want to be part of the glee club will change that.  News flash: It's a dangerous world!  Life is dangerous!  No amount of security guards at shopping malls and airports is going to change that.
Posted by AC at 9:02 AM