More news about The Killer Inside Me movie

Ain't It Cool gives a mention to the new movie:
Killer Inside Me at Ain't It Cool
Posted by AC at 11:45 AM 1 comment:

And now for MORE STUFF EVERYBODY SHOULD READ 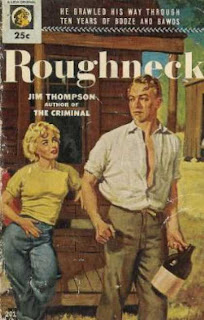 Hopefully you've read Bad Boy.  Now you're ready for the second part.  Jim Thompson's Roughneck is, like Bad Boy, wildly funny and in some parts, incredibly tender (for a Jim Thompson book.)  Thomspon seemed to be aware of how wacky his life was.  He wrote about it over and over again, though never quite as candidly as in these two books.  Roughneck picks up a bit after Bad Boy ends.  The book concludes on one of the saddest notes I've ever encountered in literature.  Maybe some folks might find it cheesy.  That's just because they a.) aren't writers and don't understand how important it is for a writer to prove to his parents that he hasn't wasted his life and b.) anyone who finds the end cheesy is a fucking poser who will someday drive over a cliff text-messaging a friend about "all the other douchebags on the road."  Fuck 'em if they can't take a dose of real humanity.  Humanity, of course, has nothing to do with institutionalized morality, so don't wag your finger and say I'm wavering!  But I digress.  Read this book, goddammit!
Posted by AC at 9:46 PM 1 comment:

The Killer Inside Me movie is bringing, yet again, much deserved posthumous attention to Jim Thomspon 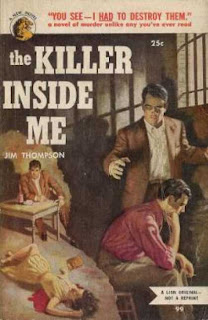 Here's an article on Jim Thompson by someone who has the time to do actual research:

Thompson article
Posted by AC at 9:14 AM 3 comments:

Other stuff I've read (and watched)

Beat to a Pulp has had some interesting material the last few weeks.  Currently, a short film by Ryle Smith called "One Good Turn" can be seen at the "weekly punch."

While you're there, take a look at "Miles to Go," a western by Edward A. Grainger.  I wish there was a bigger market for westerns (then again, I wish there was a bigger market for crime stories;  Hell, I wish it was 1954 so I could make a goddamn living writing for the pulps.)  The western, like noir fiction, is a truly American genre.  It's sad the masses don't recognize this.  There is a sentiment among the elite that westerns are somehow ancient, reactionary testaments to old world racism and genocide.  This is really just a lot of liberal arts nonsense that gets perpetuated by left-wing, knee-jerk reactionary professors, theorists, and basically sour-pussed douchebags who don't get it.  To fully understand this, read Grainger's western, which does not have a John Wayne caricature killing off Apache Indians.

If the western is your thing, there are also links at Beat to a Pulp to blogs and sites on the Internet that specialize in the genre.
Posted by AC at 11:42 AM 4 comments: 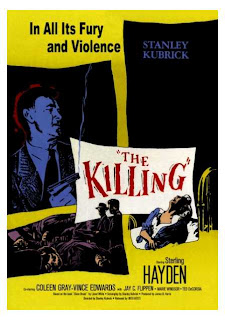 Speaking of Jim Thompson, have you seen The Killing?  I know most of you lawless, artsy-fartsy sonsofbitches probably have, but for those who have stumbled here by accident, maybe looking for some uppity shit from the Christian Coalition, sit around and hear my tale of two masters colliding for one great, unsung gem in the noir genre.  Stanley Kubrick's admiration for Jim Thompson is on record.  In fact, all of Kubrick's films tend to carry the same theme as Thompson's novels-- The stories Kubrick tells are generally about men and the systems they create in order to benefit themselves and how those systems collapse.  Strangelove is an obvious example.  So is Clockwork Orange, Barry Lyndon, and The Shining.  Most of Jim Thompson's characters were dark dreamers who conjured up plots to somehow hoist themselves out of misery.  Those plots almost never worked out.  In Thompson's case, morality was not the cause of their collapse, as other writers in the genre are / were apt to do.  In Thompson's world you are simply fucked.  It doesn't matter what plans you make, it's not going to work out.  At the heart of it is a nihilist passion for realism that makes Thomspon's work stand out to this day.  Kubrick hired him to adapt the book Clean Break into a motion picture screenplay.  Thompson's credit now reads something like, "Additional dialogue by Jim Thompson."  According to most accounts I've read, Kubrick screwed Thompson out of a proper credit.  Despite this, the two joined forces once more to write the script for Paths of Glory, considered to be one of the best anti-war films ever made.  But nevermind all that.  We're talking The Killing here.  Consumate tough bastard Sterling Hayden plays the lead, a no-nonsense thief who puts together the perfect heist at a race track.  By the end of the film nobody involved gets away.  There's a great femme fatale who gives her loser husband a hell of a time.  The narrative structure of the film is also quite radical for a production of its time.  Among others, Quentin Tarrantino owes a lot to the chronological jigsaw Kubrick created in The Killing.  The film is about 80 minutes long and moves at a nice pace.  If you're looking for a kickass movie to watch with a bottle of whiskey and a willing woman (read: willing to watch movies dudes dig,) check this one out. 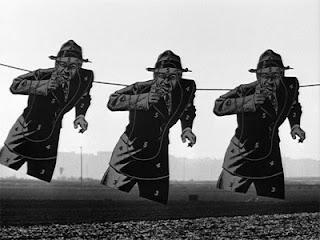 Stuff Everybody Should Read #2 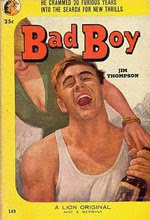 Like all great writers, Jim Thompson's fiction was about 90% non-fiction.  His life was as wild and bizarre as any of the characters or situations he created in his novels.  Like all great authors, themes and motifs showed up time and again in his work and the reason is because they were crucial elements of his real life and, thus, his fiction was a place he could put them on a canvass and look at them from a distance.  I don't know if it helped him psychologically, as we would probably like to believe.  He still died from complications brought on by the gallons of booze he drank.  This suggests to me that his writing never did quite cure him of the demons he picked up as a bellboy at a hotel during prohibition, or his terrifying encounter with a psychotic deputy in Texas.  To get Thompson's most honest account of these and other outrageous episodes in his life, pick up the first of two autobiographical books he wrote, Bad Boy.  At times the book can be very sad, but for the most part, you will laugh until your gut collapses.  This is one of the most entertaining reads you will ever encounter.
Posted by AC at 11:12 AM No comments:

My story "Saving Ralph" to appear in horror anthology D.O.A. 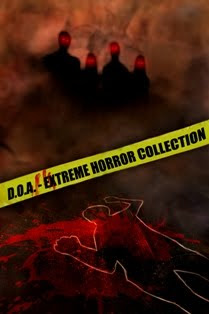 "Saving Ralph," a charming horror story I wrote about a homeless cannibal in Los Angeles, will be published in an anthology of extreme horror called D.O.A.  As soon as I get a publication date I will post it here.
Posted by AC at 8:41 PM 1 comment: