Stephen Graham Jones on the Weekly Reader for Halloween

Stephen Graham Jones discusses his book The Last Final Girl on The Weekly Reader tomorrow (October 31...Halloween) at 10:30am (Central Times).  Listen to Jones' theories on the final girl in slasher movies, nudity in slasher movies, hell, slasher movies!  It's Halloween.  It's appropriate.
Posted by AC at 12:27 PM No comments:

At this point, anyone aware of anything relevant in the universe knows that Lou Reed died on Sunday.  I feel it might be appropriate to mention Mr. Reed at No Moral Center.  The influence his music had on my thinking as an artist is immeasurable.  The Velvet Underground taught me that no subject is taboo.  More importantly, that any subject can be turned into mass entertainment.  In many ways, Lou Reed made Noir Rock (I don't know if someone has already coined that term; it's irrelevant, since Mr. Reed actually invented it...).  "Heroin," "Waiting for the Man," "The Grift," these are just a few examples from early on.  His record New York was filled with the sort of imagery we might expect from a grindhouse movie or a crime fiction novel.  Celebrity deaths are often over-sentimentalized.  This is one case, however, where no words or gestures will match the gravity of the artist's contribution to culture, both popular and otherwise.
Posted by AC at 11:03 AM No comments:

So folks have been asking me for an extension on the deadline for PULP MODERN #6.  The latest I can take a story is November 1.  Also, if you have a non-fiction piece about the Kennedy assassination, let me know, I might be able to find room for it.  Send all questions and submissions here: pulpmodern@yahoo.com.
Posted by AC at 11:13 AM No comments: 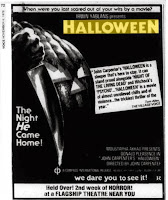 35 years ago today, the producers of Halloween opened their little movie on a few screens in Kansas City.  Further proof that folks in Kansas City are smarter than they look--without a huge advertising campaign, the film generated word of mouth buzz that started the process of building the film's massive audience.  It's the sort of thing that would never happen today.

So I have been co-hosting the Weekly Reader on KMSU for about a year now.  After having a lot of difficulty with publicists for "literary" writers, I decided to talk with writers who wrote stuff I actually enjoyed reading.  Here are links to the writers (so far):

And I was interviewed by one of the other hosts:

And in the future, look for interviews with Stephen Graham Jones, Jess Lourey, and Glenn Gray. 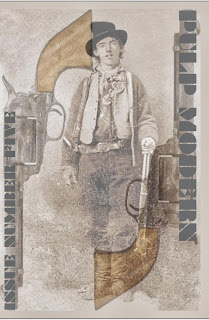 So I got quite a bit of flack for the Pulp Modern #5 cover.  I agree that it wasn't as interesting as past PM covers.  So I changed the fucker.  Here it is:
Posted by AC at 2:59 PM 2 comments:

Listen to me talk about Manifesto Destination tomorrow on KMSU at 10:30am, Central Time.
Posted by AC at 1:24 PM No comments: